Curaçao lies 37 miles northwards of Venezuela and is known as the diving paradise of the Caribbean. The 276 square miles large and thus rather small Island forms together with Aruba and Bonaire the so-called ABC Islands. Since October 10th 2010, Curaçao is an autonomous territory within the Kingdom of the Netherlands.

Curaçao has some of the best preserved coral reefs of the Caribbean, but also here the important ecosystem declines steadily. The SECORE Foundation and TUI Cruises have developed restoration measures to work against the tremendous dying of the coral reefs. The reef building Elkhorn coral is classified as being at particular risk. That is why the International Union for Conservation of Nature (IUCN) lists the Elkhorn coral as well as the Staghorn coral as “critically endangered” on the Red List.

The SECORE foundation built a coral breeding station in Curacao in 2012. During the annual spawning of bulks germ cells of Elkhorn corals are being collected in the reefs. In laboratories they get artificially inseminated and the larvae are then being raised in breeding facilities. Since 2013, also other coral types are treated equally. The focus is not solely on endangered corals but as well on coral species that are important for the reef's future as they work as reef builders. The development of this new restoration model is a milestone in the coral conservation work and is going to enable extensive economic reef restoration for the first time. A series of tests in Curaçao and other SECORE project regions in the Pacific Ocean showed very positive results.

Scientists and local stakeholders are trained in coral breeding techniques in annual workshops to ensure the long-term use of these techniques in Curaçao and other reef areas. Interested vacationers also get the chance to witness the work of the SECORE foundation at the coral breeding station. Divers and snorkelers can participate in training units concerning the protection of species which are designed in collaboration with local diving schools for the purposes of the project. As a sponsor of the project, TUI Cruises offers the new developed trainings and excursions to their customers and thus raises the awareness of the non-diving cruise vacationers for the coral reef endangerment on board.

The main objective of the project is the protection and sustainable restoration of ecologically important and endangered coral species – especially the Elkhorn coral. The knowledge gained by setting free artificially cultivated corals in order to actively restore the reef is ought to be used not only in Curaçao but worldwide to preserve diverse coral species. Additionally, workshops, training of public aquarium staff and diving schools as well as training of scientists in coral breeding techniques are envisaged. Raising awareness for the croal reef preservation of diving schools and vacationers on-site is another objective. 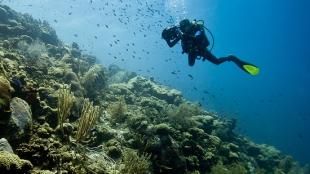