After the end of the apartheid the Republic of South Africa has become one of Africa's most popular tourist destinations. Especially the province Western Cape around Cape Town attracts visitors from all over the world. 5.2 million people live in the area around the Table Mountain, which offers many beautiful landscapes and cultural attractions and is a habitat for a wide range of plant and animal species.

The project “Life Cycle” enables the inhabitants of Capetonian townships literally to “cycle into a new life”. In the poor settlements with mostly corrugated-iron huts, the Futouris member TUI Suisse finances the training of bicycle guides. Additionally, TUI Suisse provides the guides with touring bikes for the guided tourist tours. In this way, a means of existence is created for the guides and they can generate a long-term income for their families.

Despite of the province's diverse economic structure, the economic state of many population groups is very precarious. The agricultural sector cultivates especially wine, olives and fruits. In Cape Town itself the tertiary sector dominates with its high tech and tourism industries. Around 30 per cent of the provincial population is unemployed. The averaged income of the colored people is ten times lower than the income of white people. Additionally, the high homeless and HIV rates influence the social life in many parts of the province.

The main objective of the project “Life Cycle” is the generation of safe and sustainable jobs for people of the Cape Town townships. The local bicycle tour operator AWOL Tours integrates young people in their team of professional bicycle guides. In combination with a certified training as a bicycle mechanic, the trainees learn to organize bicycle tours autonomously and how to interact with the tourists. The “Cape Town City Cycle Tour” is furthermore a climate-neutral sightseeing tour in the middle of the capital.

To get this far several steps have to be taken. First, a sustainable tour product with an obligation to enhance sustainable city tourism in the long term was developed. Thus, standards, which shape a higher cultural and ecological consciousness regarding the unique flora and fauna of Cape Town, shall be established. With the training and qualification of the bicycle tour guides and the providing of touring bicycles, a substantial contribution to the safety of jobs as well as the development of the region as a location for ecological tourism is made. 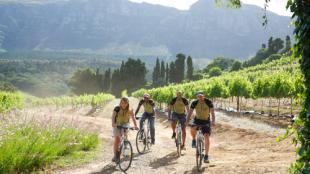