How wine is made: The journey from grape to wine

The traditional wine growing on Lanzarote in the natural reserve of La Geria is very special: the vines are planted in pits, excavated in volcanic ash that has covered parts of the island’s surface since the volcanic eruptions of Timanfaya in the 18th century. To protect the vines from the usually strong wind semi-circles of larger lava stones are built around the pits. The lava ash stores both the night moisture and the low precipitation (around 150 mm per year), prevents the erosion of the soil and contains many minerals. In addition, this mulching effect maintains a stable temperature in the clay soil, which hides under the ash layer and prevents water evaporation, whereby the effect is retained even in the lower layer. 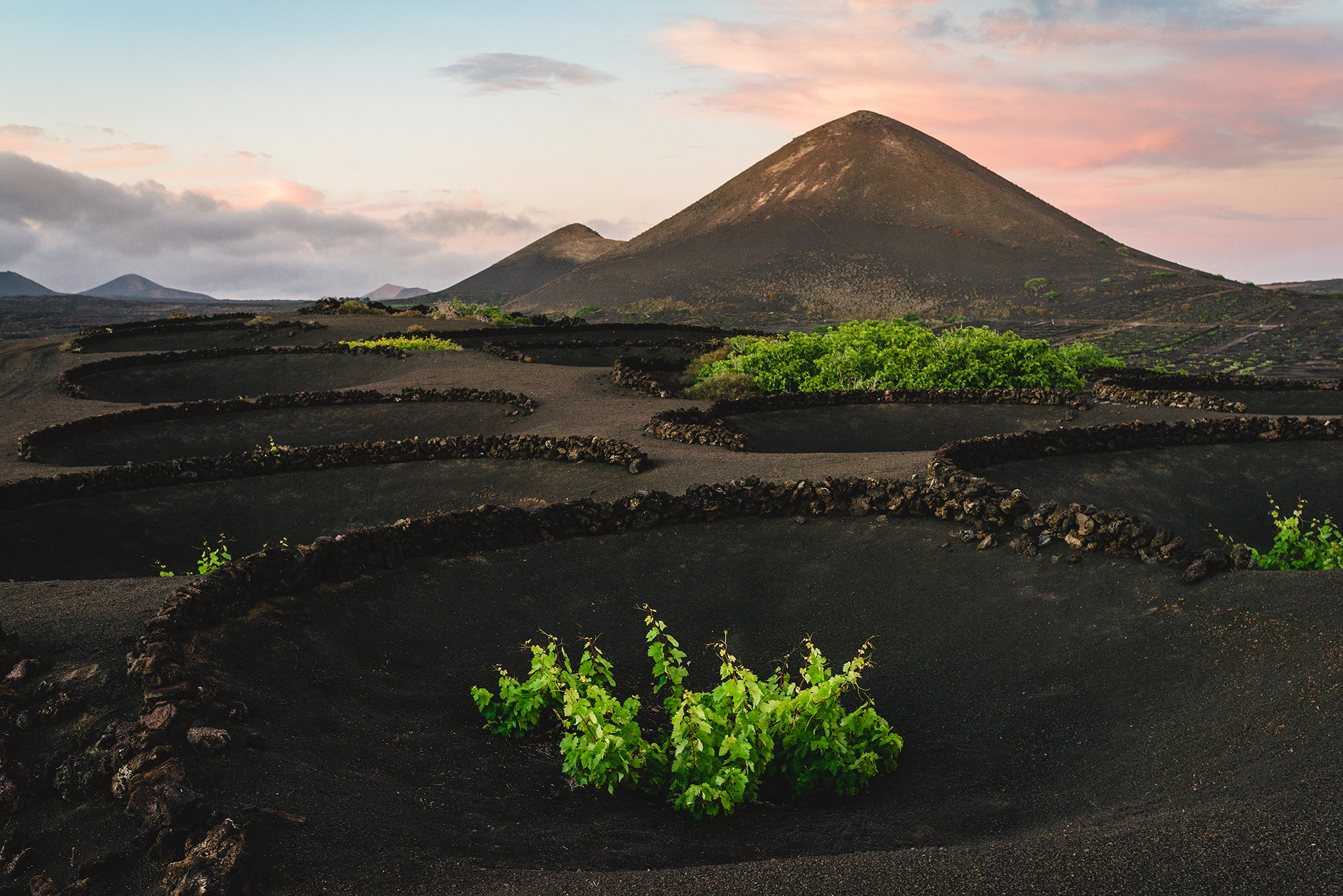 Even though the traditional cultivation is adapted to the climatic conditions, nevertheless the cultivation is not easy, so that many farmers abandon the traditional wine growing. The peculiarity of La Geria threatens to disappear. This is where the joint project of the TUI Care Foundation, Futouris, Senderismo Lanzarote and blueContec GmbH starts: Traditional and organic winegrowing is promoted to preserve the cultural heritage of La Geria. In addition, local wine producers are linked to the tourism industry to create new distribution channels.

We now like to explain the process of wine making, the journey from grape to wine.

Farmer Domingo García owns two fields on which the grapes of the Malvasía and Listán Negro varieties are growing ecologically, which means he doesn’t treat his vines with chemicals. Throughout the year he cultivates his vines, weeds, prevents diseases, fertilizes the soil, frees the vineyard from the ashes that fall into the hole and renews the stone walls. As part of the project, he and the other participating farmers will receive support for organic farming through professional advice and training.

Between the end of July and the beginning of August, the grape harvest begins in Lanzarote, la vendimia. First, the harvesting and delivery date is agreed with the winery to which the farmer delivers his grapes, based on the results of the grape analysis which determines the maturity of the grapes.

Farmer Domingo receives the number of boxes needed for the agreed amount of grapes. Now Domingo can harvest his grapes by hand; healthy and ripe grapes are harvested, rotten ones are removed. The harvested grapes are brought in boxes to one of the participating bodegas, where they are weighed. Afterwards, the quality of the grapes is determined. Depending on the technical conditions of the bodega, this is done either directly on the conveyor belt or via random samples in the boxes. In addition, the pH, the acidity, alcohol content, the amount of nitrogen and malic acid are measured in the laboratory and the color of the grapes is determined. The cleaner and healthier the grapes, the higher the price Domingo receives for his grapes. 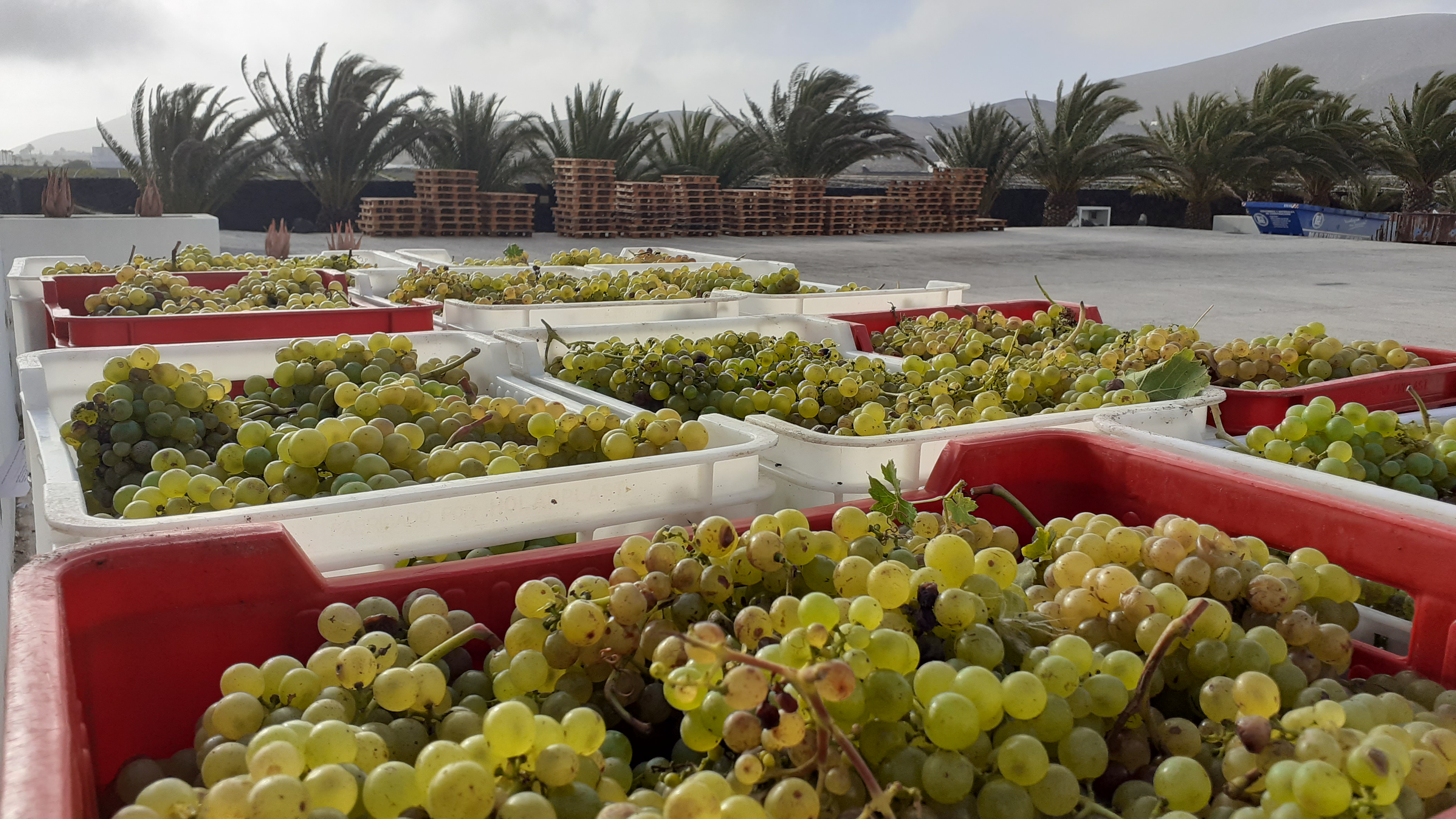 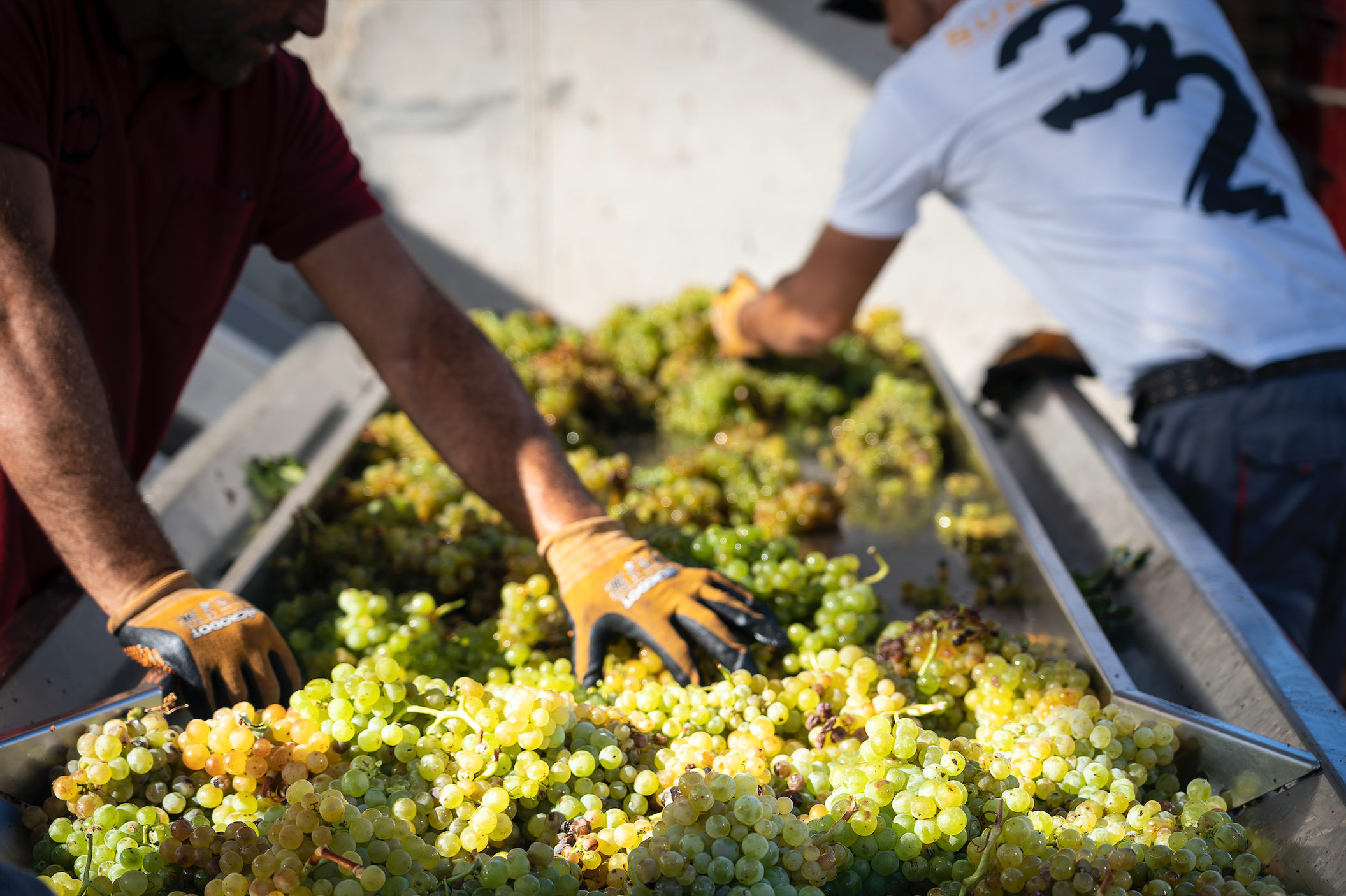 “This year’s harvest was a surprise, as the amount of grapes harvested exceeded expectations and at the same time achieved the desired quality,” says Ana de León Pérez, export manager of the Bodega Los Bermejos. 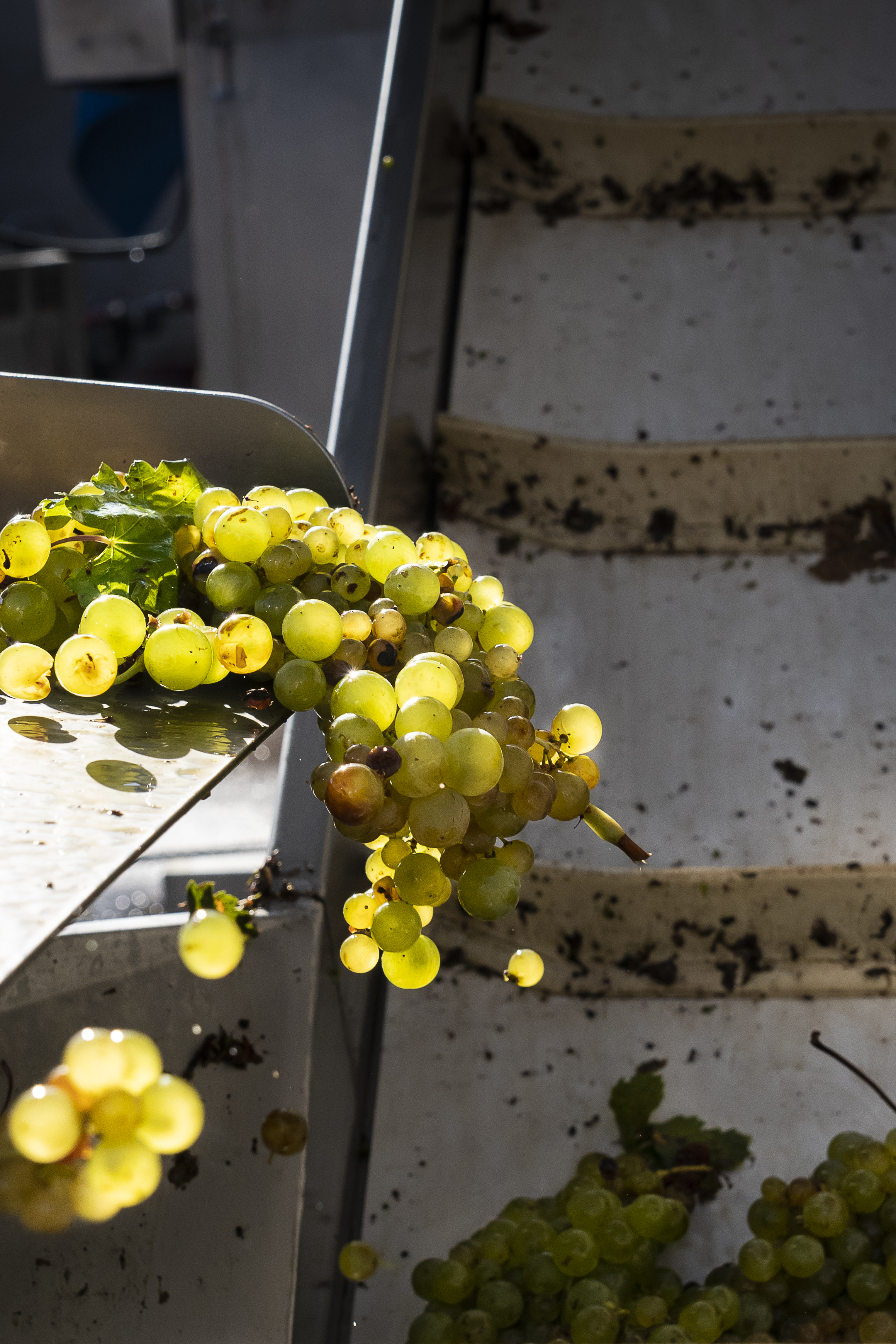 From the boxes or the conveyor belt, the grapes are filled into a machine that removes the stem, so that the grapes lie loosely. The grapes are already lightly pressed in preparation for the mash grinder. In this mash grinder the grapes are further “mashed”, but with little pressure, as not to injure the seeds, so that in the end a mixture of pulp, seeds and shell (mash) is formed. If the seeds were also pressed, they would evolve unwanted bitter substances. The freshly pressed grape juice is then pumped into the cooled fermentation tanks. When producing red wine, the skin (in some cases also the seeds) is added to the juice and stays in the tank as long as the winemaker determines.

When the wine is ready, it is transferred to a clean tank where the temperature, acidity, etc. are automatically checked 24 hours a day. From there, the wine is bottled as needed. The solid components such as skin and seeds, the so-called grape pulp, is used as a valuable fertilizer for the grapevines and brought back into the natural cycle.

The time from August to about the end of September is the most labour-intensive time for the winemakers. But they are rewarded with wine, which was not only grown and produced ecologically and sustainably, but also tastes excellent. 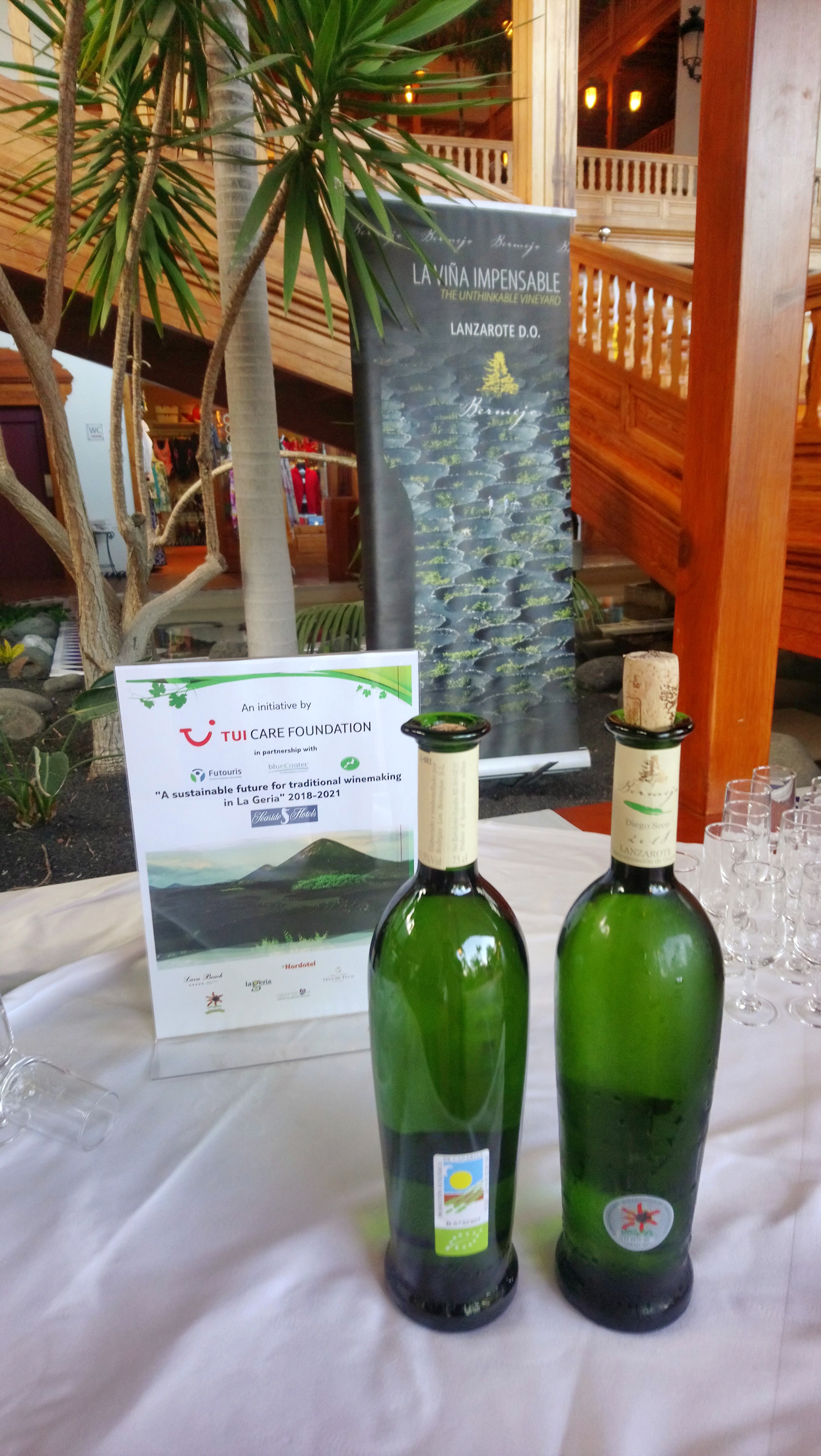 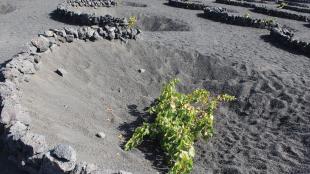 A sustainable future for traditional winemaking in La Geria

This project focusses on supporting the organic and traditional wine growing in order to preserve the natural resources of Lanzarote and the cultural heritage of La Geria. Simultaneously the local wine producers are being linked to the hotel industry so that new distribution channels will be built and guests can “taste” the unique character of La Geria. 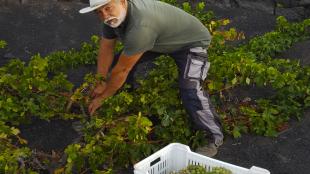